A little over four years ago, we began to experiment with a barrel now known as our Wave Stave barrel; named for the unique wave-like pattern on the interior surface of each stave. Depending on the goals of an experiment, we usually monitor the maturation for a period of four years. In any case, at the end of each year, we harvest samples from each barrel and subject them to both chemical and sensory analysis. At the culmination of the experiment, we summarize all the results and present our findings. Well, it is now four years later and today I would like to share with you some results from our first Wave Stave experiment.

The results for both chemical and sensory analysis of the Wave Stave barrel were impressive throughout the duration of the experiment. From twelve months on, sensory panelists noted higher complexity, deeper flavor and a more mature taste to the whiskey. It is also worth mentioning that the whiskey coming out of the Wave Stave barrels was significantly darker in color. Seeing a positive outcome after two years in barrel, we added the barrel to our Small Batch Series and it has been popular ever since. We have heard good feedback from distillers who have used this barrel for blending, finishing, primary aging and more.

Results are displayed as a percent of the average to easily spot any significant outliers in the overall flavor profile.
As we can see from figure 1, whiskey from the Wave Stave barrel exhibits a considerable increase in extractive content over the Char #4 barrel. One of the most frequent questions we encountered when we began to sell this barrel and present the year one data to our customers was, “will the Char #4 eventually catch up?”. In other words, people were questioning if the blue outline in the graph above would eventually level out with the orange outline. We were honest and simply said we felt that there would be less of a discrepancy as time went on but were confident there would still be significant differences.
Figure 2, extractives in mg/L 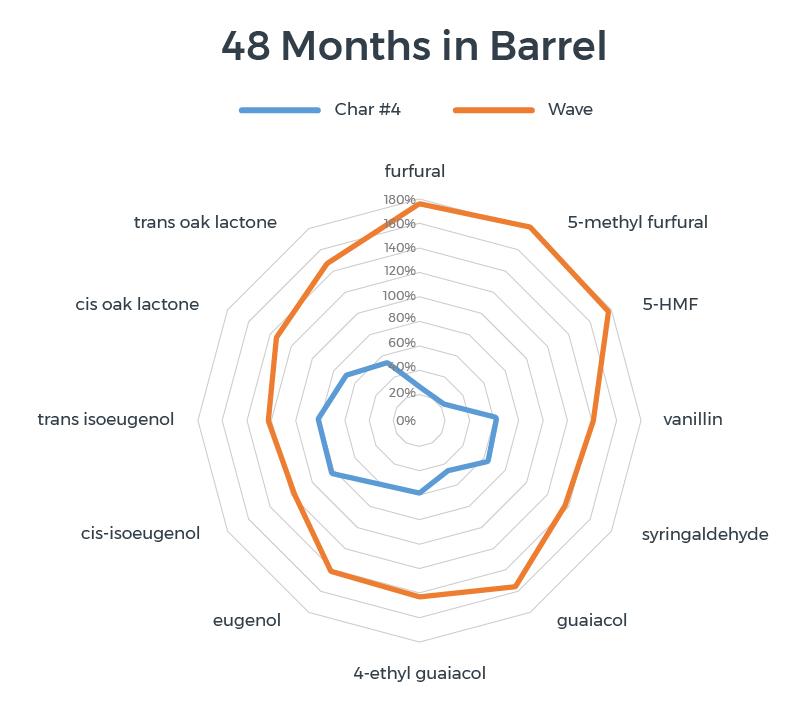 After four years, the barrel surpassed all expectations. It is important to note that the discrepancy we are seeing is not simply due to a 22% increase in surface area. The control barrel is an untoasted heavily charred barrel while the Wave Stave standard configuration features a moderately long toast with a light char. Nevertheless, the combination of increased surface area and precision toasting has yielded a barrel that has significant extractive potential.

More extraction doesn't necessarily equate to better, just different. After all, our classic char #4 barrel is responsible for producing many of the best whiskies in the world. This barrel is recommended for distillers looking to reduce time in barrel without foregoing complexity or color in their final product. We have also had great success with this barrel in double barrel finishing experiments. As little as six weeks in a new Wave Stave barrel can make a tremendous difference in the outcome of the product it contains. Reach out to our ISC Barrel Account Managers to learn more about incorporating the Wave Stave barrel into your program.