Our last post about aging whiskey on different levels of a warehouse sparked some questions from our readers about how the results we receive from our chemical analysis relate to the overall quality of the whiskey being tested. More specifically, people were interested in how extractive concentrations correlate with how long the whiskey has been in the barrel. Do the concentrations directly correlate with overall quality?

I thought it would be interesting to take a closer look at some of these extractives and see how their concentrations vary over time. I have selected some of my favorite flavor congeners and have shown below how their concentrations changed over the course of six years in a new, 53-gallon, charred oak barrel. For you blenders and distillers out there, maybe this post will give you a valid reason to utilize some of that younger whiskey in the blend.

For this experiment, all samples were collected from a single warehouse and a single floor. Identical char #4 barrels were sampled on the same day with barrels ranging in age from one to six years old. For each year of maturation, three barrels were sampled to form a composite sample for analysis. The mash bill is a standard bourbon mash bill. Due to a confidentiality agreement with the partnering distillery, I cannot display exact compound concentrations or divulge any more information about the base whiskey.

I am a fan of seeing higher concentrations (to a certain extent) of any compound that has furfural in the name. There is quite a bit of flavor variety in this family considering that we only use them as markers for hemicellulose caramelization. Aromas ranging from caramel and coffee to other organics such as hay and tobacco can be detected when higher concentrations of furans are present (that’s why we call them markers). The bad news is that they tend to decrease in concentration as maturation progresses. The good news is that the lighter and sweeter flavors generally seen in correlation with 5MF and 5-HMF, go down very slowly. These compounds are quite variable from barrel to barrel so discerning how old a whiskey is by looking at furans can be tough - I do not recommend it. 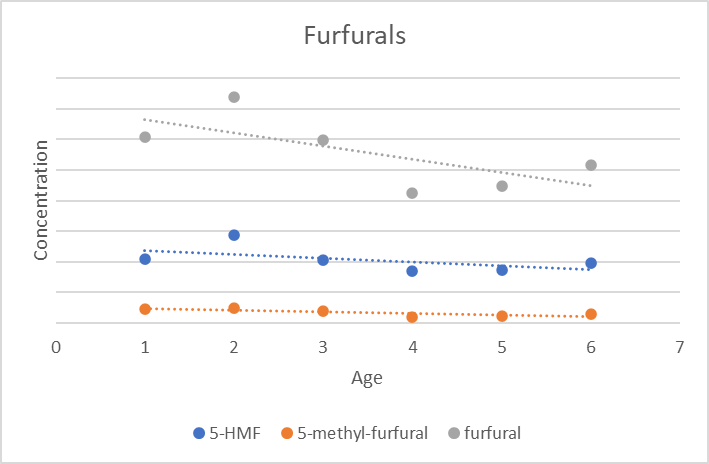 Compound responsible for aroma and flavor of vanilla bean extract

One of the more popular flavors in barrel aged spirits is vanillin. Who doesn’t want more vanilla in their whiskey, right? The good news is that vanillin concentration is always on the way up and it rises at a pretty good rate as well. We can detect this compound early on in maturation but whiskeys that have a very strong vanilla character generally have been in the barrel the better part of a decade. As such, this is a signature flavor component in older aged whiskeys. I find that vanillin reaches ideal concentrations when the whiskey is around eight years old. This is one of those compounds that can give us a decent idea of how long whiskey has been in the barrel, given we know what kind of barrel was used. Vanillin extraction is very consistent given the heat treatment on the barrel remains the same. If I had to guess how old a whiskey was, I would want to know the concentration of vanillin. 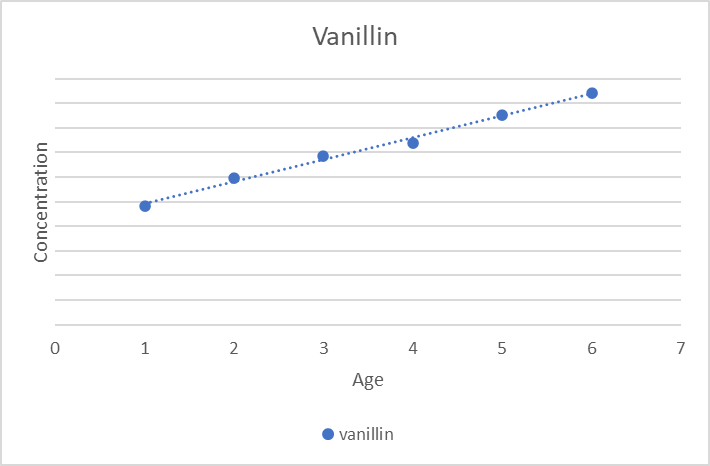 Maltol comes from multiple sources and is generally described as having similar aromas to caramel, marshmallows, and cotton candy

I am not a huge fan of cotton candy so its ok by me that this compound diminishes over time. For those who do like these flavors, younger whiskey is going to be your ticket to getting them to be more prevalent in your blends. This guy disappears quick and essentially retreats down to ‘zero’ so break out the two-year-old whiskey and throw it in a blend for a flavor profile filled with marshmallow and cotton candy goodness. This compound can hang around for years (as it did with this experiment) or it can literally disappear in a year's time, so we cannot really determine how old a whiskey is by looking at this compound. 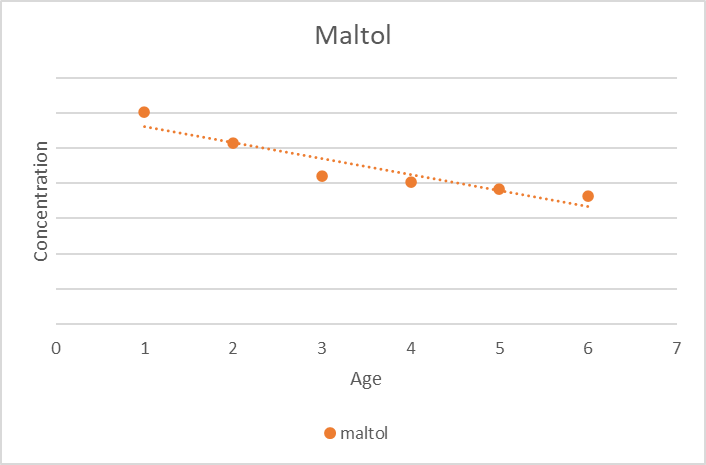 Last, but certainly not least, are the lactones. More specifically, the cis oak lactone. This guy is responsible for that elusive coconut flavor rarely found in high concentrations in barrel aged spirits. Like all compounds, lactone comes into the whiskey right away but it generally takes many, many years in the barrel to become somewhat prevalent. Unfortunately, lactone levels can vary drastically from tree to tree and from a cooperage standpoint, there isn’t much we can do to increase (or decrease) the concentration. What that essentially means is that sometimes they show up in high concentrations and sometimes they don’t. When lactones are in high concentrations, it makes for a very favorable addition to any whiskey. The good news is lactones are always on the rise so if you can pick them out at a young age, its only going to get better. As you can probably guess, being that there is variation from tree to tree, we have trouble guessing how long whiskey has been in a barrel based on lactone concentrations. 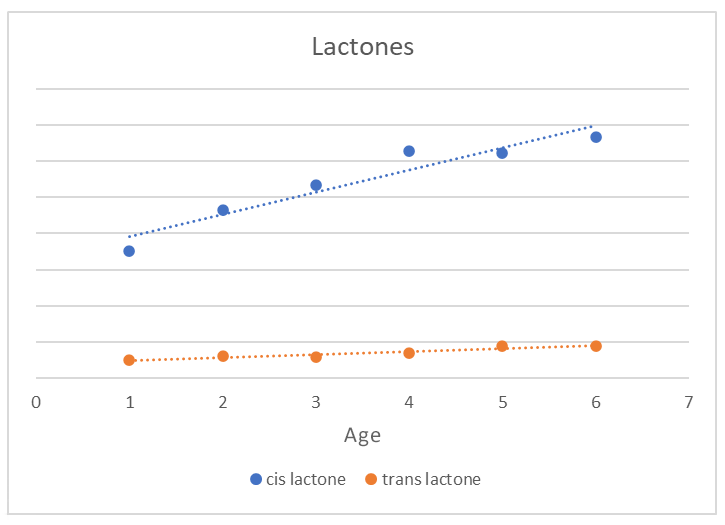 Hopefully, this gives you some insight into how flavor profiles develop in barrel aged spirits. Keep in mind, the curves you see are for one type of barrel and extraction rates will differ based on quite a few variables such as climate and entry proof. As I have shown, certain compounds will always go up and certain compounds will always go down. Also remember, the type of barrel can drastically alter how fast or slow those changes in concentration occur. If you would like to learn more, give Chad Spalding or myself a call to discuss how we can go about altering the barrel to make some of these flavors more or less prominent.