The rich history of bourbon is part of what makes it so alluring. Ask any bourbon aficionado and they'll tell you a detailed account of their favorite brand - when it was founded, where the original distillery was located, renowned master distillers and more. While tradition is a cornerstone in modern distilleries, no one lives their history on a day-to-day basis quite as thoroughly as George Washington's Distillery at Mount Vernon.

"At Mount Vernon we operate the reconstruction of George Washington's Distillery, which was originally constructed over the winter of 1797-1798. The distillery is set up precisely as it was in that time period, with five wood fired pot stills" said Steve Bashore, Director of Historic Trades at Mount Vernon. "In the industry today, distilleries ferment in large stainless-steel fermentation tanks and have extensive modern systems, pumps and pipes to move ingredients and mash through the distillery. We move water and grain by hand, as they did in the 1790s. The mash is rowed by hand with mash rakes instead of automated with agitators in the fermenters as you see in modern distilleries." 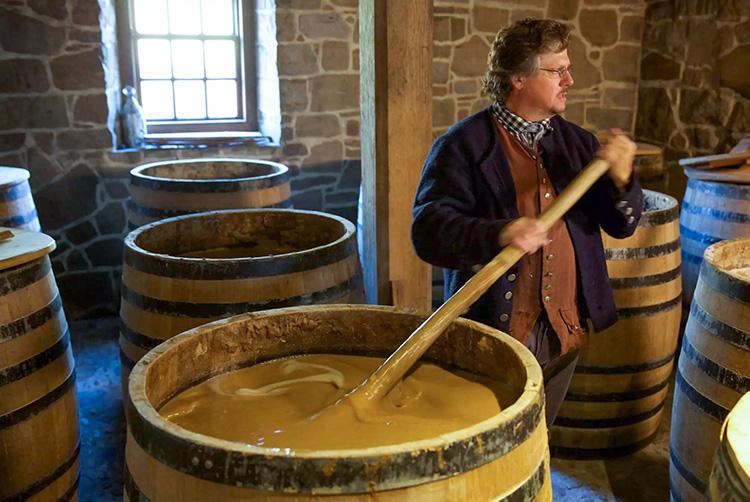 The 120-gallon barrels George Washington's Distillery needs to ferment with historical accuracy are commonly used in winemaking, but not distilling. They needed a cooper who specialized in both whiskey and wine barrels - enter our Missouri Cooperage in Lebanon, MO. Missouri Cooperage, a subsidiary of Independent Stave Company, crafts ISC Barrels for spirits as well as making wine barrels.

"Our stave mill in New Florence, Missouri seasons staves for large format barrels to send to our wine barrel cooperages in France and Australia, so we already had the material for these barrels" said Cole Gann, Missouri Cooperage Production Manager. "Because this isn't a size we regularly make in Missouri, these barrels take much more time and manual craftsmanship. Our Master Coopers enjoy the challenge and skill that goes into making these barrels every few years."

The Process of Making a Mash Tun Fermentation Barrel

Crafting the Staves & Raising the Barrel
Our team uses the extra-large version of our new G5 technology to joint 46 staves, which together form a 112” bilge. Using the head hoop as a guide, Master Cooper Hank Breedlove raises the barrel stave by stave, adding a quarter hoop and belly hoop after all 46 are set. Each hoop is custom cut to fit the barrel perfectly.

Bending & Bringing Together
After being raised, the barrel is heated over an extra-large oak fire pot for approximately 30-40 minutes. This makes the wood pliable so Hank, together with Wine Barrel Supervisor Dave Woods, can use a steel cable to squeeze the staves together at the top allowing the remaining hoops to be placed onto the barrel.

Making the Head
Tom Spiers of Missouri Cooperage now “steps the croze out” – meaning he precisely measures the croze to calculate the size and shape of the head. Then, because of the size needed, he cuts the head out of stave material instead of heading material. Next, he shapes the bevel and bead by hand before handing the finished head over to Hank who fits it into the barrel.

Finishing
Once the barrel is structurally complete, it is sent to Master Cooper Brian McCord for finishing. There, Brian quality tests the barrel for liquid-tightness by adding water to it for a duration of time. Finally, Brian sands the barrel down by hand – removing the hoops one by one and putting them back on by hand as well. This process can take up to 2.5 days but afterwards the barrel is complete. 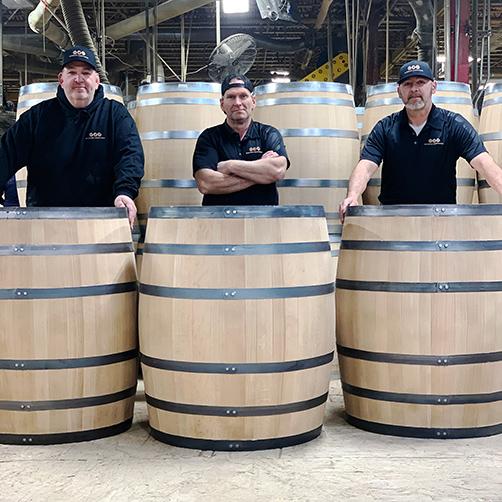 History is the name of the game at Mt. Vernon where every part of the property is kept to strict historical accuracy. However, using original distillation processes also imparts special characteristics to the spirts at George Washington’s Distillery.

“Elements of our whole process add to the unique flavor of our rye whiskey, from how we cook and ferment, to how we run wood fired stills, the distillery itself lends to a rye whiskey that is special and sometimes has a hit of smoke in it, from the fires” said Bashore.

“It is a challenge to ferment and distill the way we do, but we are here to represent the history of distilling and to work in a period accurate manner with the tools and equipment that was available in the 1790s. We have been at it for about 14 years now and have come to understand our methods and processes well, and as such the whiskies we produce are great quality, and more is to come in the next few years.”

If you’re visiting Mount Vernon, don’t miss the opportunity to tour George Washington’s Distillery – you might just spy our fermentation barrels. The distillery and reconstructed water-powered gristmill are open for tours daily from 10am to 5pm, April 1 - October 31. While you’re there try George Washington’s Rye Whiskey - the official spirit of the Commonwealth of Virginia.